I admit I watch How I Met Your Mother despite the ridiculous overacting and nauseating cheesiness.  I’m not sure why I watch it, actually.  Just because there’s shit else on TV on Monday nights, I guess.  (Though I am getting into The Sing-Off.)  And every week I wonder how the show gets such great ratings when it’s so damn campy.  Do more people really watch it (and Two And A Half Men and Home Improve-oops, I mean that crappy new Tim Allen show) than Parks & Recreation and 30 Rock?

Then I watched a couple reruns of Friends on TBS (thank goodness for syndicated television), episodes I loved at the time they first aired, and noticed something I hadn’t observed the first time around: Friends was suuuuuuper cheesy.  And silly and predictable and all those other nasty adjectives I use to describe shows like HIMYM.  So it occurred to me that it must be inevitable.  The things we think are funny and clever become, some years later, cheestastic.  Comedy is topical and fluid and changes with each generation, with politics, current events, ever-evolving social norms, and so on and so on.

The thing is, though, that as I watch shows like HIMYM or Two And A Half Men, now while they’re currently airing, I already think they’re more cheesy than funny, too absurd to laugh at, one cheap setup-and-payoff after another, far from anything clever or genuinely smart.  On the other hand, I’m falling more and more in love with Happy Endings, a show that’s also cheesy and predictable.  So what’s the difference?

The difference, I believe, is chemistry.  Whether the characters are in and of themselves likable AND if the group of actors who play them have charismatic on-screen banter.  This is where the magic lies.  Are they believable as friends/lovers/family, whatever the case may be?  Are they fun/interesting/compatible with each other?  Or do you think that if they were real people, they would despise the very sight of one another?  Honestly, I think that in the real world, Lily & Marshall would find other married couples interested in starting a family to hang out with, rather than two whiny singletons and a sleazy womanizer.  And none of them would like Ted.  He is decidedly unlikable.  Obnoxious, if you will.  And no one could possibly truly like the characters of Two And A Half Men.  They don’t even like each other, which provided some mild entertainment for the first season or two but has long since become played-out.  (Full disclosure: I haven’t seen any of the current Ashton Kutcher-ful season.)

Shows like Will & Grace, Scrubs and That ’70s Show (and now, Happy Endings and Parks & Recreation) were also silly and over-acted but the characters simultaneously cra 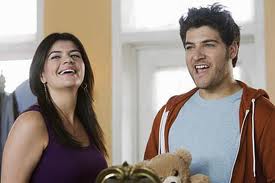 cked you up and made you wish you were part of their crowd.  I can’t honestly say I’d like to be among the Dunder Mifflin employees of The Office or the lunacy of 30 Rock, but the writing there is so smart, it more than makes up for that.  Besides, while many of the characters of those two beloved series aren’t exactly likable, they are hilarious and have fantastic chemistry.

Which qualities matter the most to you?

Let me start by saying, I like Kevin Smith.  I know he gets a lot of hate and I sort of understand why, but I like him.  That being said, I freely admit that his films aren’t for everyone.  His humor is silly to the point of ridiculousness, excessively crude and as sexual in nature as pornography.  When I read about his latest endeavor, Red State, a horror flick he both wrote and directed, I wasn’t sure what he’d give us.  Horror films aren’t exactly his forte.  But kids, let me tell you, this is a gem.  Kevin Smith may have finally grown up.  Not that I don’t love his earlier flicks (Clerks, Mallrats, Clerks II) and it’s not like they were all completely juvenile and absurd (Chasing Amy, Dogma) but this is well beyond the scope of anything we’ve seen from him thus far.

It begins with a couple of teenage boys who go online searching for chicks and find a local ad for a girl who’s willing to do “anything.”  They schedule a secret tryst and head out to the outskirts of their tiny, ultra-conservative southern town, only to discover something much uglier and more sinister than the wild night they expected.  I’m not going to divulge anything more for fear of ruining its deliciously creepy tone.  You’ll see none of Smith’s usual suspects; in fact, had I not previously known this was a Kevin Smith film, I’d never have suspected it.  He wrote a surprisingly good screenplay and employed real actors instead of those goofy kids he grew up with and, aside from a few segments that dragged just a bit, he had me on edge, craning my head to catch every detail and listening as though I were deciphering code for the better part of 88 minutes.  The film is filled with nuance, something that’s been lost in American cinematography for a couple of decades now, and sorely missed.  It reminded me of the strange, dark tales of the ’70s, films like Taxi Driver and Straw Dogs (the 1971 original, of course).  Movies that surely weren’t made for the masses but are rich in depth and realism, and are disturbingly violent.

Michael Parks gives an excellent performance as the movie’s main villain and Kyle Gallner, Nicholas Braun, Michael Angarano and Melissa Leo stand out as a few of the teenagers who find themselves in difficult circumstances.  The man who iced this succulent cake, though, was none other than John Goodman, whose performance made my hair stand on end.  He never ceases to impress me.  I’m so happy he’s taking care of 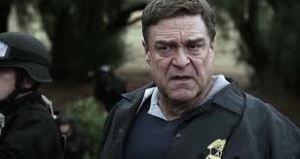 himself and getting regular- and really good- work again, I could sing.  I LOVE that man.  LOVE him.  He’s an actor of compelling severity, with range that few in his field can rightfully claim.  When he’s on the screen, I am watching, listening.  Eagerly.  Period.  He’s that good.

Then come back and thank me.

OOHH, I am soooooooo happy The Walking Dead has returned!  Two episodes in, I think this season is living up to last – advancing the storyline and taking the characters to new places, which is what I had hoped for.  This is coming from a person who knows nothing about the comic (graphic novel?) on which this is based, other than the fact that it exists.

I am interested to find out more about this family/group who lives in the farmhouse, how they’ve managed to stay safe, and apparently have supplies, like orange juice.  It made me feel hopeful, that there are some places on the planet where you can be clean and have antibiotics if you need them.  I loved the scene where the vet was explaining why surgery is so difficult in a house; how you need the respirator to be put out but if you’re not put out and are writhing around, the operation is impossible.  We take so much for granted, don’t we?!

I think the cast is doing an awesome job.  Some random message boards I frequent like to hate on the show (most of these angry watchers are devotees of the comic), saying it has strayed too far from the source or the writing is cheesy.  I don’t know if my standards are shot, but I don’t find the show cheesy really at all.  It’s not perfect, but it sure as hell brings the thrills/scares every week (this show scares the shit out of me regularly, whereas the new American Horror Story  – advertised as “terrifying” – really kind of doesn’t).  The scene in episode 1 where everybody is laying underneath the cars as the zombie herd passes by had me on the edge of my seat, holding my breath right along with ’em.  The end of episode 2, with Otis and Shane trapped in that entryway as the zombies are right up in their face, was insanity.

I love Norman Reedus and Sheriff Rick.  I’m really interested to see if Carl lives or dies.  I want to know if they’ll find Sophia.  I want to know if Andrea will gather up the balls to just kill herself already.  And I want the group to  find other survivors, and see if somewhere, somebody is coming up with a cure.  As Hershel says, “Mankind’s been fightin’ plagues since the beginning.”

I think this show roxxx and season 1 is on Netflix instant watch, and is only 6 episodes, (roughly 4.5 hrs of your life) so if you aren’t watching it, quit being stupid!  Or zombies will come eat your face off!! 😉

You all know I adore Halloween and nearly everything it involves but today I thought I’d share with you a few things Halloween-related that really get under my skin:

What Halloween-inspired pet peeves irk you the most?